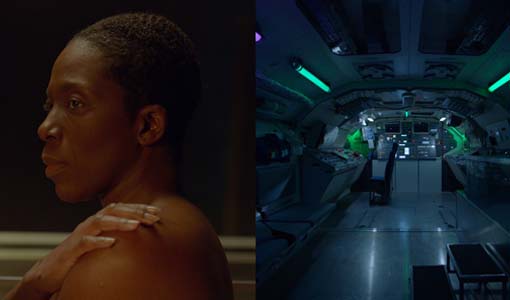 The science fiction-inspired film Doppelgänger (2019) by prominent artist Stan Douglas will be on view Oct. 16, 2021-May 15, 2022, at Toledo Museum of Art (TMA), its first North American museum presentation. The film centers around an astronaut named Alice who embarks on a solitary outer space mission. When Alice’s ship unexpectedly turns around, she presumes she has returned to Earth, but instead, she arrives at another realm, the exact reverse of her true home. In one version, Alice is welcomed and provided support upon her return, while in another narrative, Alice is received as a potential hostile threat. The work comprises two translucent screens, which can be viewed from either side and display parallel narratives that unfold simultaneously.

“Through non-linear storytelling and intentional ambiguity, Doppelgänger allows viewers to embark on their own quest of personal discovery,” said Adam M. Levine, TMA’s Edward Drummond and Florence Scott Libbey director and CEO. “Stan Douglas’s work is particularly resonant for the Toledo Museum of Art in light of our articulated commitment to creating an authentic culture of belonging for all visitors.”

“For decades, Stan Douglas’s beguiling and critical works have explored how image-making and narrative influence collective memory as well as our understandings of the world around us,” said Jessica S. Hong, TMA’s curator of modern and contemporary art. “This ambitious work coalesces Douglas’s artistic concerns and has even greater potency for all audiences in our current moment.”

Doppelgänger employs science fiction as a prompt to understand the temporal intersections and simultaneous realities that exist in our present. Alice’s return, one as a benevolent earthly citizen and another as a potentially dangerous alien, alludes to the heightened debates around citizenship and homelands, such as the reception of immigrants and refugees, as well as the systemic exclusion and oppression of marginal communities. The continual mirroring and sense of displacement throughout the film echoes many people’s experiences during the current pandemic. For those able to stay at home, individuals are constantly observing their own visages and conducting their lives mediated through a virtual screen. As the world enters a new phase of this pandemic, society finds itself confronting a new, unknown reality.

Though there are dual narratives, Doppelgänger does not intend to highlight two distinct possibilities. In a world of competing truths, the film explores our physical and quantum entanglements, leaving open numerous possibilities about how we can shape our unfolding collective stories. Because of its open-endedness, Doppelgänger invites audiences to return to it and ruminate on its allegorical themes well afterwards.

Douglas will represent Canada at the 2022 Venice Biennale.

The installation of Doppelgänger at Toledo Museum of Art is supported by season sponsor ProMedica with local support from presenting sponsors Susan and Tom Palmer and the Ohio Arts Council.