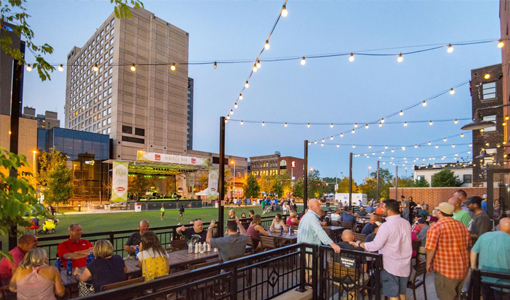 The 2021 Solheim Cup team announced that The Danberry Co., Realtors will be the presenting sponsor for the kick-off event to the 2021 Solheim Cup — Solheim After Sundown Downtown. The event, open to the public, will be held on Tuesday, August 31 from 6 to 9 p.m at Hensville Park. Tickets are on sale now.

Solheim After Sundown Downtown will be the first of several celebratory events during Solheim Cup Week, which will be held in Toledo, Ohio, August 31 – September 6 and culminate in the 2021

Solheim After Sundown Presented by Danberry Co., Realtors is the kick-off event for Solheim Cup week and will take place right in the center of downtown Toledo on Tuesday, August 31! Come kick off Solheim Cup week in Downtown Toledo at Hensville Park. The $75 ticket includes access to the event, one (1) drink ticket, and a practice round ticket for Wednesday, September 1st.

The event will include live music, live grilling, and a live and silent auction with all proceeds going to the Danberry Treasure Chest.

Solheim After Sundown will not be hosted at the tournament course, and is not included in your previous Solheim Cup ticket purchase.